Following in the footsteps of the Cybermen from Doctor Who, Ash from Alien and the T-800 from Terminator, Crank Tech One is on the loose and causing chaos.

Released on Thursday 30 October, Crank Tech One: Destruction, the audiobook produced by In Ear Entertainment, follows the story of science fiction author Tim Bailey as a robot model he plans to use for publicity comes to life and heads towards Cardiff leaving chaos in its wake.

Named Crank Tech One after the robot in Tim’s novel, Crank is chased by police, scientists, thugs and goths. All of a sudden, Tim becomes the only person who might be able to figure out Crank’s mission and stop him.

Crank Tech One: Destruction was written by Welsh author Colin R Parsons and is narrated by voice actor, musician and comic writer/artist Dave Bulmer. It has been published by In Ear Entertainment, a UK audiobook publishing company specialising in horror and science fiction. 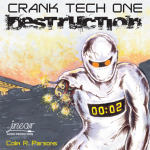 Colin R Parsons, author of Crank Tech One: Destruction, said: “I’ve always wanted my work in audio format, and to have the opportunity for In Ear Entertainment to make it happen was amazing. Listening to my novel being read back to me was a fantastic feeling.”

An ever-growing amount of people have been discovering the convenience and joys of audiobooks in recent years thanks to the rise of Audible and iTunes. The ubiquity of media players in the form of iPods and smartphones has turned everyone’s pocket into a doorway leading to thousands of books, In Ear Entertainment is right on the other side of that door with fresh literature from new talent for lovers of all things science fiction and horror.

Dave Bulmer, narrator of Crank Tech One: Destruction, said: “I’ve always had a passion for audiobooks. I’d even recorded a few myself and uploaded them to my YouTube channel. Working with In Ear Entertainment has allowed me to explore voice acting more and it is something I will be pursuing further.”

Mark Chatterley, The One in Charge at In Ear Entertainment, said: “Coming in at 5 hours this is the longest audiobook we have created to date. Dave has done an amazing job with the characterisation of all the characters and his skills will have listeners laughing out loud and get their hearts pounding as they follow Crank and Tim’s journey.”

The audiobook is available from the In Ear Entertainment website and from Audible, Amazon, iTunes and through BardOwl shortly after.